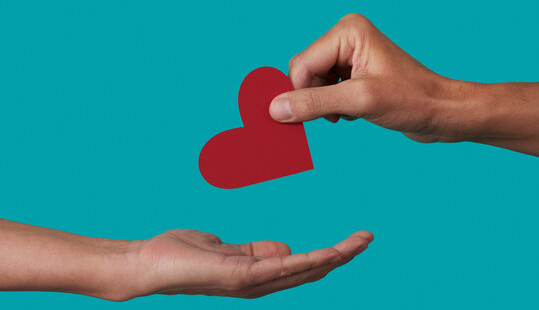 Generosity Comes From The Heart

20-11-2022
So today I learned to give. No, no, I learned to forgive others of their debt. This morning around 6:45h when I was praying sitting up in bed, God spoke to me. In the midst of the Lord’s prayer:

Matthew 6:12 [HCSB] – And forgive us our debts, as we also have forgiven our debtors.

I have been praying for my debt to be paid off, having Crazy Faith after watching the 19th part called Fading Faith of the Crazy Faith series by pastor Michael Todd of Transformation Church. After praying that part in the Lord’s prayer, it was like that verse alone highlighted. It gained a new meaning for me. My eyes were opened to a new understanding of it. And I asked myself: “how can my debt be paid off by the end of this year, eventhough I have the faith, and even if it’s that mustard seed size, I have it! But how can it be paid off if I have deptors myself?”

Matthew‬ ‭18‬:‭23‬-‭35‬ [‭HCSB] – “For this reason, the kingdom of heaven can be compared to a king who wanted to settle accounts with his slaves. When he began to settle accounts, one who owed 10,000 talents was brought before him. Since he had no way to pay it back, his master commanded that he, his wife, his children, and everything he had be sold to pay the debt. “At this, the slave fell facedown before him and said, ‘Be patient with me, and I will pay you everything! ’ Then the master of that slave had compassion, released him, and forgave him the loan. “But that slave went out and found one of his fellow slaves who owed him 100 denarii. He grabbed him, started choking him, and said, ‘Pay what you owe! ’ “At this, his fellow slave fell down and began begging him, ‘Be patient with me, and I will pay you back.’ But he wasn’t willing. On the contrary, he went and threw him into prison until he could pay what was owed. When the other slaves saw what had taken place, they were deeply distressed and went and reported to their master everything that had happened. “Then, after he had summoned him, his master said to him, ‘You wicked slave! I forgave you all that debt because you begged me. Shouldn’t you also have had mercy on your fellow slave, as I had mercy on you? ’ And his master got angry and handed him over to the jailers to be tortured until he could pay everything that was owed. So My heavenly Father will also do to you if each of you does not forgive his brother from his heart.””

These verses came to my heart. And all I thought was “I don’t want to be like that”. And as I was praying and stood still at that line in the prayer.. this one person who owed me an amount popped in my head. And then.. God spoke to me. He said to forgive him of his debt.

I had no moment of doubt in me. It was peaceful and clear what God put on my heart. But instead of messaging the person right away to tell him, I decided to let the moment settle. And then it passed. And the longer I waited, the louder the questions in my head started to make theirselves known. Was that really You, Father? Is this from You? Do You want me to do this? I rebuke the devil trying to confuse me! But wait, what is it with us always trying to rebuke the devil when things go wrong, when we doubt and loose focus. Yes, he tempts us, but doubting, is totally on us..

James‬ ‭1‬:‭2‬, 6-‭8‬ ‭[HCSB] – “Consider it a great joy, my brothers, whenever you experience various trials, knowing that the testing of your faith produces endurance. — But let him ask in faith without doubting. For the doubter is like the surging sea, driven and tossed by the wind. That person should not expect to receive anything from the Lord. An indecisive man is unstable in all his ways.”

2 Corinthians‬ ‭9‬:‭6‬-‭8‬ [‭HCSB] – “Remember this: The person who sows sparingly will also reap sparingly, and the person who sows generously will also reap generously. Each person should do as he has decided in his heart — not reluctantly or out of necessity, for God loves a cheerful giver. And God is able to make every grace overflow to you, so that in every way, always having everything you need, you may excel in every good work.”

What was I waiting for? So after about 6 hours of running around the bush and allowing distractions to take my mind from it. I decided to finally sent the person a message. And so I did, explaining Who it is from and praising God. For all the Glory belongs to Him.

Now as I watch Christmas with the Kranks and as I write this piece. At the end they actually show a very nice message. I wasn’t sure where the movie was going to at first. But mr. Krank has a neighbour rival, they always fight. Now there is a time where this mr. Krank has to give up something he really wanted. But he doesn’t just give it up and sacrifice it. No, he offers it to that rival neighbour and his wife for Christmas. No strings attached, no paybacks, just as a gift he says. And he even takes in and takes care of their cat for a few days, the cat he hates and does Not get along with at all. Mr. Krank showed a beautiful gesture of generosity. May we all take that with us to always remember, not only for Christmas, but to always be generous. In our treatment to others, in our gifts, sacrifices and offerings. Be generous with a generous heart.